This past weekend I was invited to cook dinner at the Joseph Phelps Vineyard in Napa Valley.  The Phelps family invited 60 lucky members of their wine club to be guests at an exclusive dinner held in one of the barrel rooms.  Giant oval wooden barrels that had been imported from Germany for aging Riesling in the early 1970’s lined one side of the room.  On the other side, picture windows overlooked acres vineyard stretching down to a historic green schoolhouse at the lower end of the estate.  The kitchen was simple, but functional, and is said to have been designed in part by Alice Waters and Jeremiah Towers - the focal point being a long butcher block table made from thick slabs of oak, worn smooth from years of use.  Dominique and I worked on creating a menu that would accentuate the incredible line-up of wines that the family had selected from their library.  There were a number of great bottles - but the two that stood out to me were the 1989 Backus Cab and the 1973 Late Harvest Riesling, that had likely been aged in the now retired wooden barrels that lined the dining room, and over the years had turned from golden to dark amber.  Several members of my culinary team: Yulanda (Pastry Chef), Jacob (Chef de Cuisine), Amber and Maya helped make the event a great success.  Here's the menu and wine pairings: 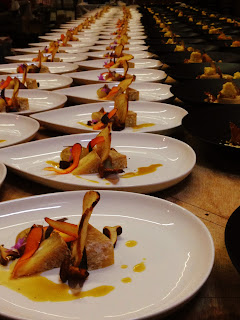 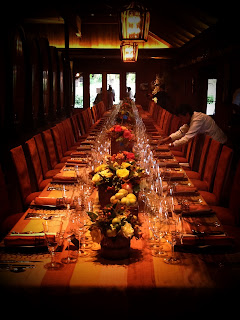 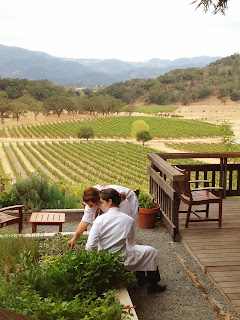