Albacore Tuna doesn’t have the glamorous reputation of its relatives - the Ahi and giant Bluefin.   The fish are smaller and their color ranges from pale pink to dark rose.  The canning industry has not done much for Albacore’s reputation, tagging it with slogans like “chicken of the sea” and packing dried out chunks in watery brine.  In my opinion, when properly prepared, Albacore can be superior to both Yellowfin and Bluefin in both flavor and texture.  When our fisherman caught two albacore off the south coast, we didn’t hesitate to buy them.

These two fish were caught and processed onboard using the taniguchi method.  In Japan, this detailed method of preparation is often required by reputable buyers when they inspect large tunas.   Without going into too much gritty detail - the process quickly stuns the fish and knocks its central nervous system offline.  The fish is then gutted, put into a protective sleeve and plunged into a salted ice brine.  This process ensures the best possible texture and flavor.  Not only does the method result in a higher grading product, it is also likely more humane.

I crusted the tuna with local sea salt and green coriander seeds then flash seared it.  The dish was finished with multi-colored carrots from Swank Farm, slow roasted in cocoa butter and a light carrot curry prepared with kaffir lime leaves, ginger and fresh coconut water. 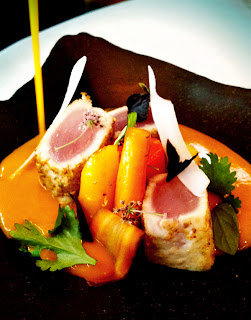