The culinary talent in our kitchen continues to grow with the addition of Willy Ono.  Most recently Willy was in Europe working at such iconic restaurants as Mugaritz and Noma (both listed in the top 50 restaurants in the world) as well as up and coming restaurants like Relae in Denmark.  Prior to his work in Europe he was a sous chef at the Mandarin Oriental in New York.  When it comes to having a refined international palate, Willy had a bit of a head start, growing up with a Japanese father and Columbian mother.  He has a passion for exploring new cultures, ingredients and techniques.  I think he is the perfect person to work with Jacob and I on developing new menus and accomplishing our ambitious goals.   It is my pleasure to welcome him and his family to Big Sur. 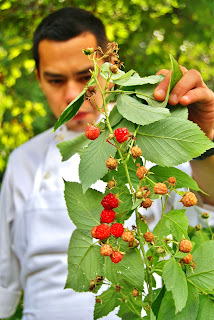 There was a time not so long ago when millions of pounds of fresh sardines were caught and processed in Monterey.  During the 1940’s, a combination of over-fishing, pollution and climate change plummeted the sardine population, shuttering dozens of canneries and putting thousands of people out of work.  Over the last few years the sardine population has started to recover and commercial boats can once again be seen fishing for them in the bay.  Sadly most of the locally caught sardines are destined to be shipped overseas where most will be processed into fish-oil, pet food and other fish-based products.  A few high-grade sardines will be packed and canned - some even making their way back here to the Central Coast.  These tiny fish are so labor intensive that practically none are sold fresh in the US.

Sardines have a rich-red meat that is covered in an iridescent skin so fragile it will tear with even the most gentle touch.  Due partly to their high fat content, the sardines do not last long and must be eaten immediately after they are caught.  A fresh sardine cannot be compared to a canned sardine- any more than a can of tuna can be compared with a sashimi grade tuna loin.  Fresh sardines have a firm texture with a buttery, mouth feel and a clean-refined flavor, perfect for eating raw or lightly cured.

We received some fresh sardines and decided to showcase them on the dinner menu.  We fileted the sardines, carefully removing the tiny bones before dusting them with local sea salt.  After fifteen minutes we rinsed the filets and patted them dry.  The filets were then brushed with a meyer lemon-fennel pickling liquid.  We cleaned the spine and fried it until crisp (my favorite part of eating sardines).  A few pickled-carrot chips and local olive oil finished the plate.  The dish is reminiscent of a traditional Spanish escabeche with our own Big Sur twist. 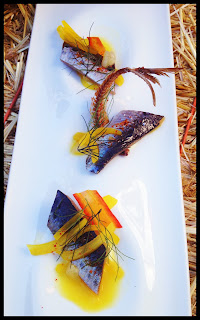 This week brought the first good rain of the season.  I was woken up at 3 a.m. on Tuesday morning to a spattering of raindrops against my bedroom window and a cold wind whipping up the coastal ridge and through my open window.  With the rain comes the inevitable inconveniences of fall - the sliding rocks, muddy roads, power outages, downed trees and other events that make us slow down and remember that Big Sur is further from town than we sometimes think.  The rain also signals a change in season and the promise of new and exciting ingredients.  Hillsides that have been covered in dry - golden grass will soon be bright with new growth, tiny chanterelles will begin growing from spores hidden below fallen oak leaves and wild watercress will flourish in seasonal streams.  When the sun had finally risen, I looked out my window to see a beautiful yucca in full bloom.

Yucca is a temperamental plant, only blooming sporadically under ideal conditions.  They require just the right amount of warmth, coupled with a good rain and a well-timed hatching of yucca moths to pollinate the flowers.  For these reasons you cannot predict when or if these mysterious plants will produce blossoms.  The yucca blossom is in fact so rare, that while it is the state flower of New Mexico, where I was raised, I don’t ever remember seeing them flower.  This was a great way to start my day - and I took a moment to enjoy the majestic plant framed by the coastal sunrise.....before getting a machete and hacking it off.  What can I say - I’m a chef, not a florist, and this rare flower was destined for the kitchen.

The beautiful white blossoms are similar in flavor and texture to Belgian endive and lend themselves to being marinated, sautéed or quickly fried in a lite tempura batter.  I created a lunch special with sautéed yucca petals and tempura yucca blossoms accompanying seared rare tuna.  The rest of the blossoms are going to be pickled this evening and used later in the month.  This week I hope to make a drive down the arid south coast to see if other plants are in bloom. 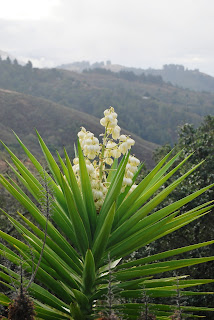 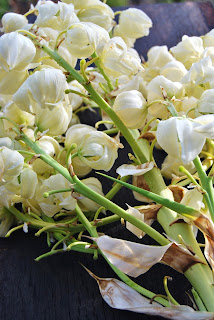 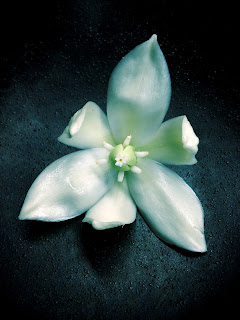