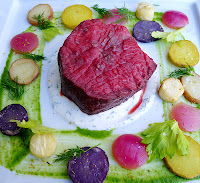 This is our version of a Swedish potato salad with new potatoes, celery root, pickled onion, wild watercress puree and dill crème fraiche.  Slow roasted wagyu in the middle and a touch of fennel pollen to finish the plate.  A fitting celebration for this glorious sunny January day! 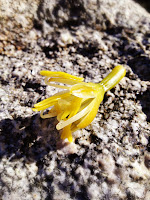 The foxtail agave, or agave attenuata, is a truly incredible plant.  If you have followed this blog or eaten at Sierra Mar, you know that I am a fan of edible herbs and blossoms, but this is unlike anything I have ever seen.  The agave plant itself is giant, a perfect spiral of pointed leaves with a spike resembling an aqua green rhino horn protruding from the center.  These plants are an incredible addition to any garden, but as soon as they send up their flowering stalk, they die.  Most agave flowers are beautiful and exotic, but the foxtail tops them all, in fact, a more apt name might have been the elephant trunk agave, because that is what the stalk resembles both in shape and sheer size. 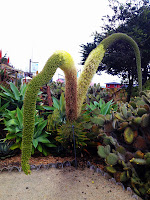 Adding to its mystery, the stalk begins as thousands of tiny buds which slowly open from the base to the tip.  This process can take months and only a few lines of buds will be open at any given time, leaving rows of dead buds behind and unopened buds in front.  The only plant I have seen that is similar is the monstera fruit, which is reminiscent in shape and ripens in spirals one row at a time.

Many parts of the plant are edible, from the roasted heart to the sweet sap, unfortunately they are rarely available for experimentation.  Luckily I was able to trade some contraband goose liver to our sommelier for a few previous blossoms from his garden.
at 10:41 AM 2 comments:

Join me and Sierra Mar Pastry Chef Yulanda Santos as we welcome guest Chef Michael Laiskonis for a very special eight-course dinner event.  Chef Laiskonis is the former Executive Pastry Chef at New York’s famed Le Bernardin and currently the Creative Director of New York City’s Institute of Culinary Education.  He and Yulanda are teaming up to present The "Citrus, Chocolate & Spice Dinner" on February 23.  In addition to the eight courses, there will be an optional wine pairing available.  It should be a great evening of food and wine!  Click Here For More Information
at 3:53 PM 2 comments: 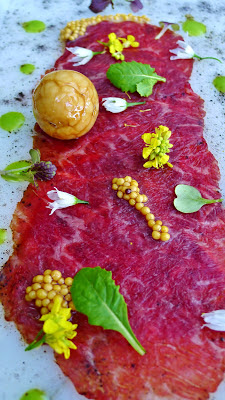 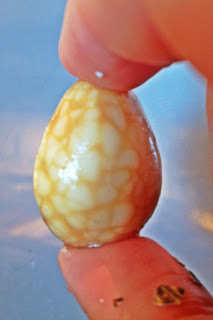 For this dish we make a powder using black salt, sugar and carbonized onion - we sprinkle this mix onto the plate and then torch it so it forms a caramelized crust.  Thin slices of wagyu are laid on top and the seasoning mix is absorbed.  We compliment the shaved beef with petite mustard greens, pickled mustard seeds, wild garlic blossoms and wild mustard flowers.  Quail eggs are soft boiled and then gently cracked before getting marinated for a week in a brine made with black salt and carbonized onion - the color of the brine permeates the cracks in the egg and leaves it with a sweet-smoky aroma.
at 6:04 PM No comments:

There are a few varieties of seafood that must be either cooked very quickly or braised for hours before becoming tender; anything in between will result in meat that has the consistency of a rubber tire.  A few examples are squid, geoduck clams and octopus. 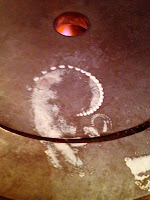 This week we got in two fresh octopus.  You can find dozens of tips and myths on how to make octopus tender, ranging from cooking it with a penny to pounding it with daikon radish.  Some of these work well and others are merely old wives tales.  The truth is that getting tender octopus is just a matter a patience.  If you are working with a fresh octopus you start by rinsing it in fresh water and then scrubbing it in a bowl with coarse sea salt.  As you slap the octopus around in the bowl the layer of slime will begin to come off.  It takes a good five to ten minutes of aggressively working the octopus with salt to get it clean.  Next you cover the octopus in an aromatic liquid that has been cooled (think - bay leaves, garlic, thyme, salt, espelette, etc).  Cover the pan with foil and transfer to a 180 degree oven - cook for 10 to 12 hours until the octopus become fork tender. 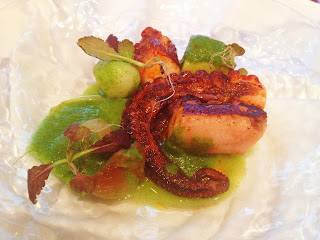 This results in an octopus that is tender - but in some ways lacks texture and some depth of flavor.  To remedy this we transfer the braised octopus onto a red-hot griddle and lightly char the exterior.  Once the octopus is removed from the griddle (ten seconds at most) they have a slightly crisp exterior and juicy interior with just a touch of smokiness.

Finding fresh octopus is not easy.  When I worked in Hawaii, my sous chef would occasionally spear octopus in the fish pond by Hamoa Beach.  He would bring the octopus to the surface, spit out his snorkel and bite down hard on the top of the octopus head, killing it before its tentacles attached to his dive suit or gear.  I have also occasionally found octopus at the wharf from fisherman who catch them in black cod or prawn traps.  Regardless of where you find it - a fresh octopus is well worth the effort!
at 9:26 AM No comments:

Recently, Jacob started experimenting with a few batches of different sprouts including barley and green lentils.  Perhaps it is the time of year, wishing for the longer days of spring, that inspires the idea of new growth. The green lentils have sprouted beautifully splitting slightly to send out a thin white shoot (the barley not so much).  As the lentils sprout some of their starch in converted into sugar, making them easier to digest, but still somewhat starchy for my taste.  Jacob pan fried them in olive oil to crisp them and then served them with braised Wagyu shortrib and roasted cauliflower.   The quick immersion in hot oil was enough to completely change the flavor profile and texture of the lentils, leaving them crisp and sweet with a hint of organic earthiness. 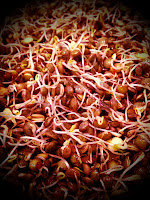 I'm excited about the prospects of sprouting different seeds and wonder what else might work:   Fenugreek, Quinoa, Black Sesame, Peanuts, Garbanzo Beans, Mustard, Coriander - the options are limitless.  Look for some new sprout ideas on the blog soon!
at 4:56 PM 2 comments: 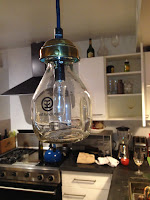 Unfortunately I can't take credit for this clever idea.  Damien Georis, the winemaker at Georis Winery, recently installed these custom fixtures at his house in Monterey.  Apparently winemaking is not his only talent.
at 11:51 AM 41 comments: 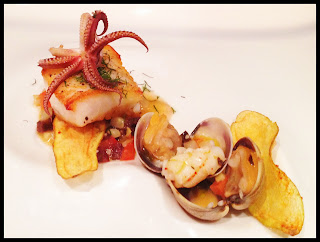 We have recently been getting some beautiful trap-caught black cod out of Monterey Bay.  Many people associate cod with the ubiquitous filets of bland dry fish, because unfortunately many species are passed off as fresh cod in the market.  In fact, even black cod is not a true cod, rather sablefish.   Like most of California's prized seafood, much of the sablefish catch is exported to Japan where it is frequently broiled with a miso glaze. One reason that sablefish may not have caught on too much in the US is due to its anatomy; instead of having a single line of pin bones, it has two sets of pin bones that form a "Y" through the middle of the filet, making the fish challenging to butcher and low yielding.  These fish are well worth the challenge and have a mild flavor and rich-buttery flavor akin to the Patagonian Toothfish (Chilean Seabass).  Fortunately, unlike the Chilean Seabass which has been almost fished into extinction, the Pacific black cod fisheries are well managed with strong populations.  We are serving the black cod with fresh Monterey Bay Squid, Manilla Clams and Mouro Sausage (a smoked blood sausage traditional to Portugal).
at 10:05 AM No comments: