Jellyfish, though abundant in California, rarely finds its way onto our tables.  I have long heard that dried and reconstituted jellyfish is considered a delicacy in Southeast Asia and parts of Japan, but have never seen any reliable reference on eating fresh jellyfish.  Hours of research unearthed few details on how to prepare jellyfish or even whether fresh jellyfish are edible.  The idea that an ingredient that stings would be an choice ingredient is not too unusual, think about stinging nettles as an example.  In the case of nettles the toxins are quickly destroyed when heated, allowing the cooked leaves to be used in soups, pastas and a variety of preparations.  While this analogy is somewhat reassuring, I have never heard of a nettle killing someone, unlike some species of jellyfish that can kill their victims in a matter of minutes.

My research indicated that cannonball jellyfish is one of the most widely consumed species, but unfortunately, are not found in Monterey Bay.  Moon Jellyfish were the only benign local species that seemed even semi-promising.  The best instructions I could find called for brining the jellyfish with salt and alum in various ratios for several weeks, then drying it.   Given that a fresh jellyfish is composed of 95% water, this seems like a last resort.  Given how perishable the fresh jellyfish are, it seemed likely that over the years people might have used curing and drying as a method of preservation rather than a culinary necessity.  Unfortunately I could not find any sources to back up my hunch that a fresh jellyfish could be eaten raw, other than a couple of odd online videos depicting a fisherman swallowing a live jellyfish with visible discomfort.

Having come to an impasse in my quest to determine if local jellyfish is edible, I decided there was only one thing left to do, find one and give it a try.  Two days later I held a clear bag filled with filtered sea water and watched as the translucent bell of a live moon jellyfish undulate inside.  After removing the live jellyfish I removed the tentacles and internal organs, then rinsed the bell in cold fresh water.  The gel was firmer than I expected and looked like a block of ice melting in my hand.  At first I cut a small piece of the gel and dropped it into simmering water.  Almost immediately it began to curl and shrink, quickly dissolving into nothing.  I cut another small piece and popped it in my mouth before caution got the best of me.  The texture was soft and smooth with a slight firmness.  The gel soon began to melt coating my tongue with the briny taste of sea water.  The sensation was cool and refreshing, like the world’s most delicate oyster, awakening the palette before dissolving into memory.  Like the aroma of fresh sea urchin, it brings you to the ocean, like inhaling a waft of sea mist.

Next I took a small piece of the jellyfish and topped it with fresh grated ginger and lime juice.  The spice and acid helped cut a bit of the saltiness and balance the sea flavor into a more palatable experience.  By this time the remaining jellyfish had already started to dissolve, trickling down the sides of the cutting board into viscous pools.  As soon as the jellyfish touches air it begins to break down, which may explain why it is so often seen dried rather than fresh.  In a last ditch effort to save our jellyfish we dipped it into liquid nitrogen and then put it into the freezer.  This did stop the gel from dissolving, but the refreshed gel did not have the same delicate texture as the fresh gel we tried.  In the future I will try keeping the jellyfish in water or oil to minimize its contact with oxygen.  Either way, this is a product that would need to be procured just hours before serving……….I think it will be well worth the effort. 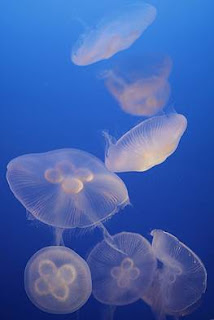