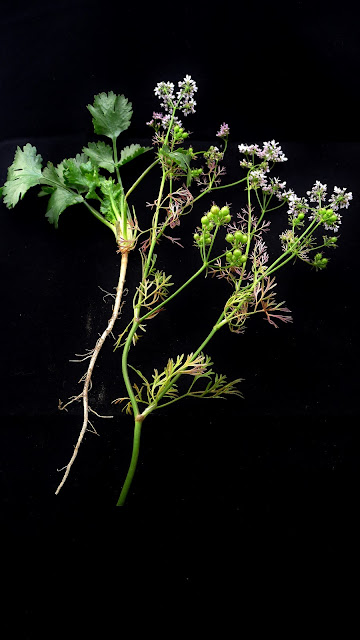 Cilantro is an amazing culinary herb that has become a staple in cuisines around the globe.  People either love or hate its cleansing floral aroma that hints of soap and perfume.  Right now our cilantro in the garden is representing a full life-cycle and a number of culinary applications.

Coriander and cilantro are different words for the same plant - but it is more common for fresh leaves to be referred to as cilantro and dried seeds to be referred to as coriander.  The seeds and leaves, while similar, each have distinct characteristics and applications.  As the plant ages, the leaves towards the top of the plant become frond-like and take on a bit of the bitterness and complexity similar to the seed’s flavor profile.  Soon after this happens, the plant produces tiny white and pink flowers that are one step closer to the flavor of coriander seeds.  A week or so after the flowers emerge bunches of fluorescent green seeds form between the flowers.  When these seeds are dried they become the brittle pale bb’s found in spice cabinets around the world, but in their fresh state they pop with an intense aroma.

Often overlooked here in the US, the plant’s roots are prized in South East Asia where they are a staple in curries and soups.  When pulled from the ground they resemble small,
fibrous parsnips.  Their flavor is similar to the leaves, but deeper and less bright.  The benefit of using the root is that unlike the leaves, that quickly lose their aroma and turn bitter when heated, the root retains its mellow aroma when heated in a sauce or braise.
at 9:27 AM