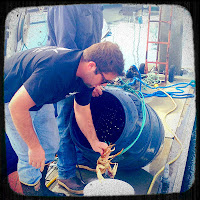 As a I opened the box of local black cod I could tell something was not right.  The filets had a dull finish and indented easily with a gentle press of the finger.  Droplets of water percolated out of the loins and I could immediately tell the fish had been frozen.  The person who had sent me the fish is a reputable local business, but unfortunately deception and misrepresentation are rampant in the fishing industry.  Angrily, I called the distributor demanding that he bring fresh fish within the next hour and remove the garbage he had sent.  There is no way of telling whether he meant to send the offensive product, or simply overlooked a shipment from his own distributor, but either way these occurrences happen all too frequently across the wholesale fish industry.  It does not matter whether you are buying direct from a fisherman, or from a National seafood distributor, it is a problem deeply engrained in every aspect of the business. 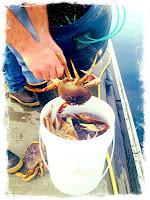 For me, this was the final straw, it was time to cut out the middle man and go directly to the source.  I live only a few blocks from the commercial wharf in Monterey, where numerous fisherman and shops process seafood on a daily basis.  Armed with a 50 gallon trash bag and my tiny BMW roadster I departed on a mission.  A local prawning boat had just pulled up and I was able to get a few pounds of still-jumping spot prawns.  Tiny Sanddabs and a few giant black cods were just being loaded onto ice.  I purchased 15 live Dungeness crab being held in the tank of a boat inside the marina and barely fit the thrashing bag into my trunk.  There is simply no substitute for picking out seafood in person and I plan to start visiting the wharf as often as I can.
at 3:35 PM