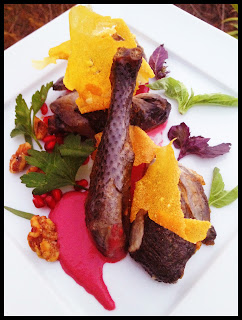 Silkie Chicken is a breed that is commonly found in China and Southeast Asia.  Unlike most chickens, the silkies have feathers that resemble long fur, making them look like a cross between a long-haired cat and a cartoon chicken.  However, it isn’t until the feathers are removed that things start getting really weird.  The skin of the chicken is inky purple verging on black from the beak all the way down to the talons.  Despite the chicken’s bizarre look it has a flavor very similar to its Western counterparts, mild, but with the depth of flavor as you would expect from a pasture-raised bird.

This week I was inspired by a classic Persian dish called khoresht fesenjan خورشت فسنجان.   They say people eat with their eyes first - which is too bad because this dish is ugly!  It is little more than a bowl filled with chunky brown slop.  Once you get past the initial disappointment and take a bite, you experience a surprising contrast of flavors and textures, earthy – tannic walnut accented with the bright acidity of pomegranate, smooth and rich, yet at the same time crunchy and delicate.  The second I tried it I knew I wanted to create my own version - a version that would preserve the integrity of the original while boosting its aesthetic appeal.  My understanding is that this dish would often be served with tah-dig, the crispy layer that forms on the bottom of the pot when making pilaf.  It might also be accompanied by fresh herbs and other side dishes.

To start I created a stock using the black chicken bones - then sautéed local walnuts and pomegranate seeds with olive oil and onion until they were caramelized.  I let the walnut-pomegranate mix slowly simmer in chicken stock until everything was tender and it could be blended into a smooth puree.    Instead of trying to replicate the tah-dig, we cooked short-grained rice with saffron, then blended it and dried a thin layer onto a silicon mat.  The resulting translucent rice crisps were then dropped into hot rice-oil where they puffed up into vibrant yellow crackers.