Last week we participated in the Pebble Beach Food and Wine Festival.  Each time we do a food event we try to do something new and exciting - but when you are cooking for 2500 people, logistics can be a challenge.

Earlier this year I was researching caviar and was amazed at the pictures of giant sturgeons in Russia filled with Caviar.  Old ladies in hairnets were intently bent over each fish extracting the precious roe.  I learned that each mature fish can carry six to eight pounds of roe, and is almost entirely filled with the dark grey eggs.  Of course this is an ingredient steeped in controversy - and I would never think about supporting the unsustainable caviar trade.  I wondered whether an American paddlefish would have as much roe and whether it would be possible to acquire one for the upcoming event. 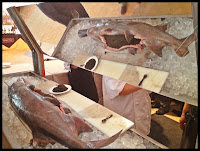 With a quick search on Google I was able to find a handful of people who either caught or farmed paddlefish in the South East.   For a moment I felt optimistic, but soon learned that nobody was willing to commit to getting a whole fish with roe inside.  I called fisherman, farms and universities but got the same answer everywhere I looked.  Finally I called Renee at Big Fish farm who was also not terribly optimistic about the project.  The challenge is that the roe is extremely perishable and cannot be shipped inside the fish.  Since the fish are held in large wild "ranches" it is always uncertain how large the fish will be or what it will yield.  The harvesting season is in late March and early April, but there was no guarantee the right fish could be located at the time of the event. 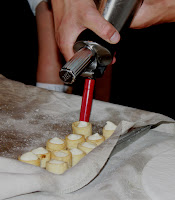 Finally, after much back and forth, we devised a plan.  The fish would be caught and held in a smaller enclosure until the event took place.  The roe would be removed from the fish and lightly cured before getting shipped to California with the whole five foot long fish.  Renee and her husband sounded incredibly knowledgeable, but I had never worked with them and was more than a little concerned about how reliable this shipment would be.  The fish was scheduled to arrive on Friday before the event- this meant if anything went wrong I would be back to square one and have less than two days to put together another concept for 2500 people.

When the box arrived a few Fridays ago, I anxiously opened it.  The fish was beautiful, sleek and dark grey with a long paddle nose and frilled filters inside the mouth.  One small taste of the roe and I was convinced - it was perfect with a firm texture and mild salinity.

With the help of Aga and Martin in engineering we put together a beautiful bar using reclaimed metal sheeting from the wharf in Monterey.  This bar would be filled with ice and have a mirror angled on top to reflect the roe as we removed it for each serving.  The final result was nothing less than stunning and a crowd quickly gathered around the booth with cameras and iPhones in hand.  Six cooks worked non-stop, frying tiny potato cups, piping them full of warm potato foam, dropping in a single caper, a perfect wild garlic blossom, tiny leaf of wood sorrel and a large dollop of caviar.
These perfect bites were assembled on a tray and passed out by two serves, elegantly dressed with nails sparkling like caviar.